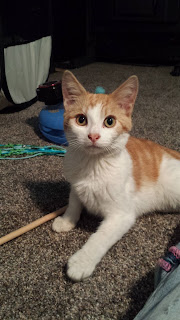 Since Charlie we have had Punkin, who wasn't quite as impressed with Roxy but he was tolerant at least. Then we had another ginger kitty, Ember, with her brother, Chrome. Lola also loves playing and wrestling with the kitties! They've all been adopted.

I haven't been able to foster since I put my house up for sale, but in my new house I'm hoping to make a little foster area in the laundry room or perhaps under a staircase. I definitely would like to continue to foster, that's for sure! Not sure how Katie, Steve's kitty, will appreciate that...............but we'll see! I know Roxy will appreciate it.

Lots of pinterest ideas for fostering if anyone is interested, it's very rewarding, even if it's a bit sad to see them go, you're keeping space open to help countless others! I just think of it that way and it's much much easier.
Posted by Jen at 7:47 AM No comments:

Charlie, the First Foster with Roxy - From Mom

I wasn't sure how Charlie and Roxy would react to each other. Roxy loves cats, but sometimes she comes on a little bit strongly at first.

I needn't have worried, they LOVED each other! In fact I've had 3 other kittens since Charlie and none have loved each other so much as Roxy and Charlie. Charlie was young enough that he would try to breast feed from Roxy! 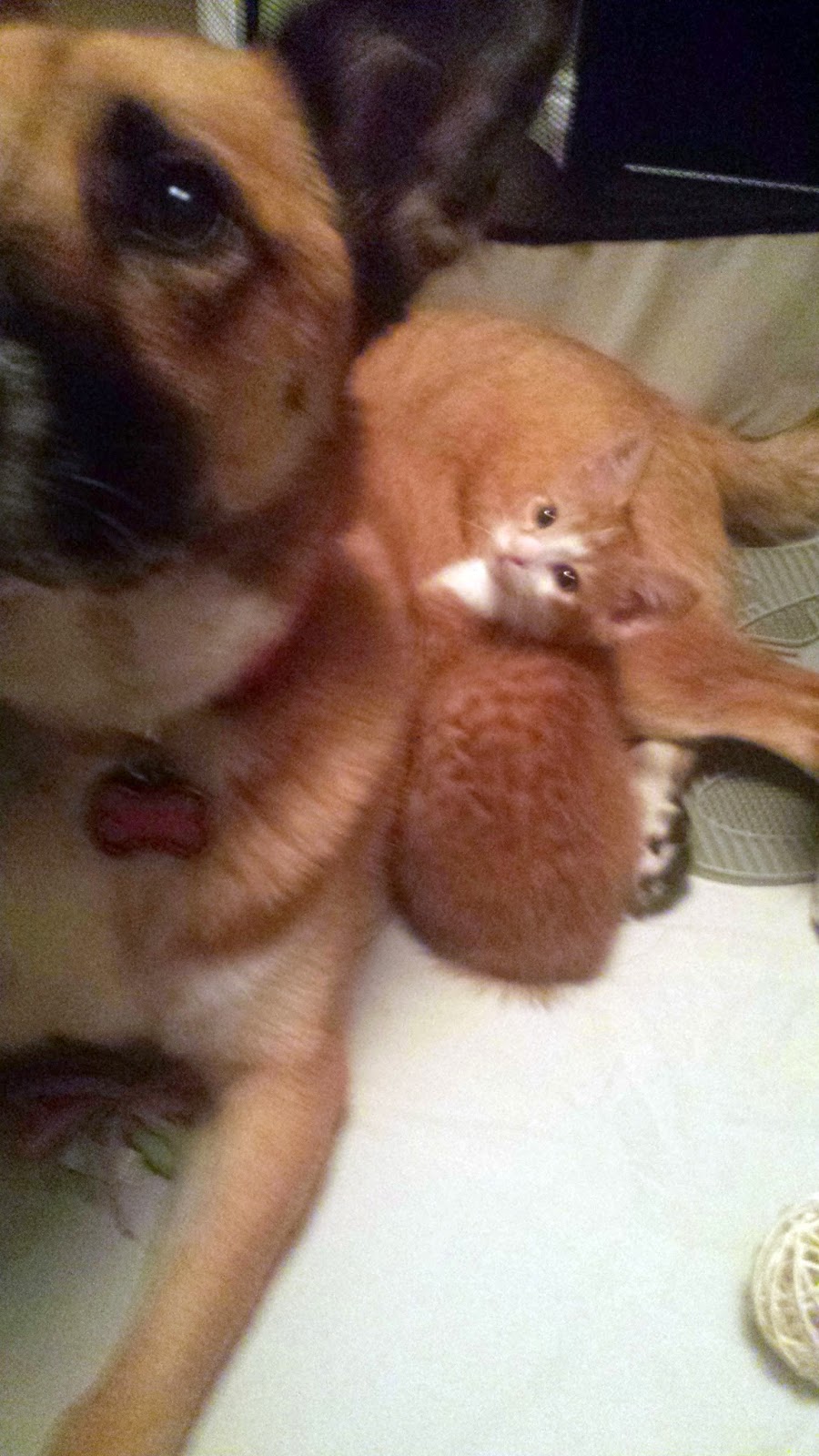 Seen here and in the picture below, he would knead at Roxy and try to get milk from her, and she would lay calmly and quietly and let him do his thing. I felt bad for the little guy, but I'm sure at least being able to go through the motions comforted him, even if he wasn't getting any milk.

Roxy was constantly bathing him. He would wander away, annoyed after too much licking, and then slowly walk back, staring up at her with his eyes squinted nearly shut, knowing he was about to get a big ol' tongue bath! 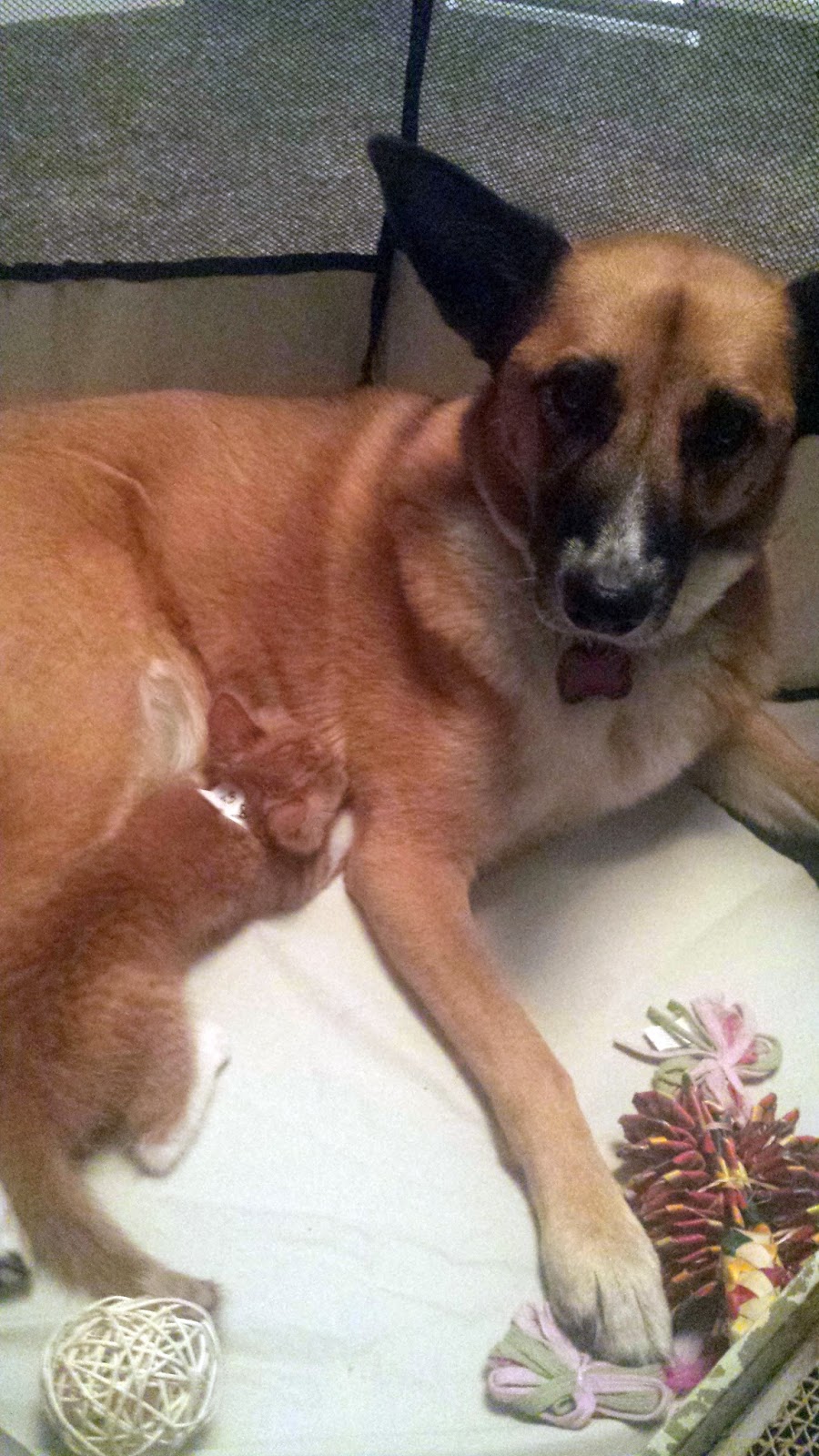 They were the cutest pair, and even looked like they belonged together. I hope another one of the fosters is as happy with Roxy as little Charlie was.

I decided not to rename this one, he was a Charlie!

He went to a family with a little girl.
Posted by Jen at 10:18 AM No comments:

Fosters Before Roxy - From Mom

You have been a HANDFUL this last one year and 10 months. I used to foster kitty's before. Did you know this? I know you love cats but I needed to get you under control before I could resume fostering again.

I always want to remember these little guys, and what better way to keep them than with you? 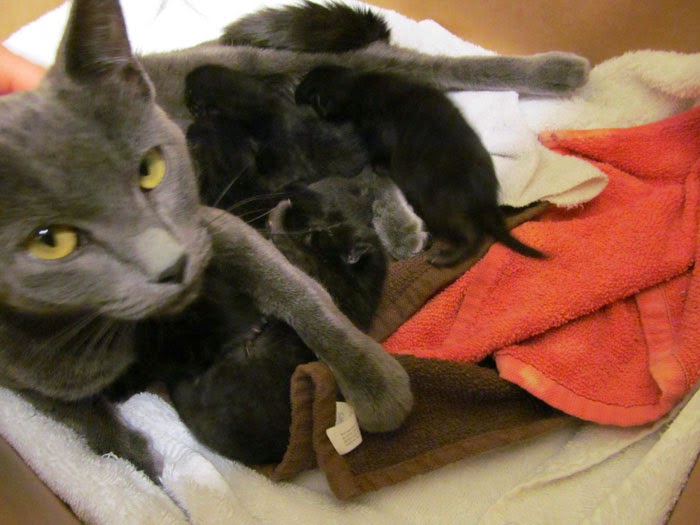 First was the gorgeous Mystique and her litter of baby kittens. Mystique was a name I chose for her. She was quick, thin, soft and shimmery. I love when you get to foster them early enough to change their names or pick one for them, it's like a piece of you goes with them. Sure, they might change their name eventually, but I like to think they'd at least remember I helped them feel better, and readied them for their forever home. And she was adopted into a new home soon after she was done at mine!

This story ends in tragedy for her little kitties however. She was too young, disinterested in being a mom, and kittens too small to even see just can't survive without her. They went from wriggling, mewling, cuddly balls of fur, to no more, in under a day. I tried to rush one back, the last living one, to be saved by the humane society. They did what they could, but it wasn't enough.

I cried and cried. Is THIS what fostering is? I want none of it! This was too hard. How can people handle it?

But my circumstance was rare, especially for a first timer. A hard dive into hardening your heart from attachment, and maybe it helped me later on to be a better foster.

They Humane Society later called me, "The perfect foster parent," even though I hadn't even fostered many. They said most people who come in and try, end up adopting them, and losing a foster is hard for a place like that, because where will the sick or small go to be healed up enough to withstand the germs and busyness of a shelter? Sure adopting is great, but you can only adopt so many to where you can't foster anymore.

Onto a happier tail... 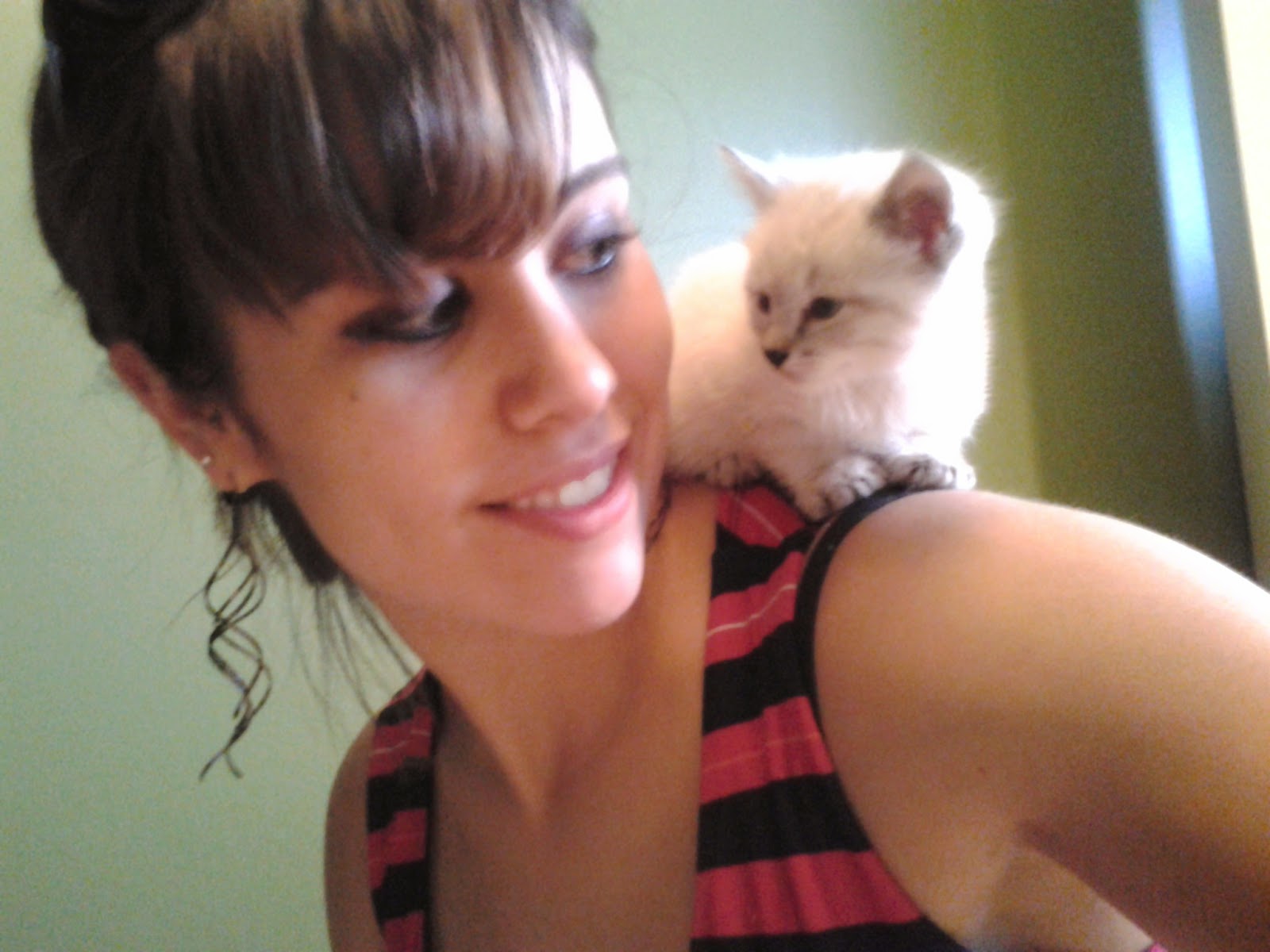 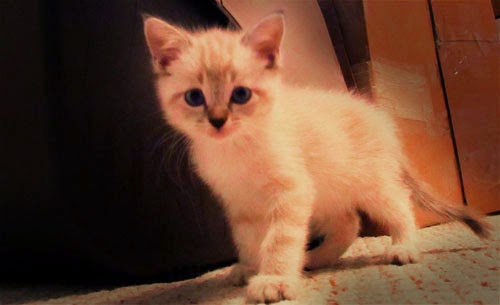 Next came Akuma and Sora. Akuma was wild, playful and fun. I named her monkey in Japanese. Sora, with her soft blue eyes and gentle nature, was calm and stoic, but sweet. She earned the Japanese word for sky. These were one of the most fun fosters I've had yet! 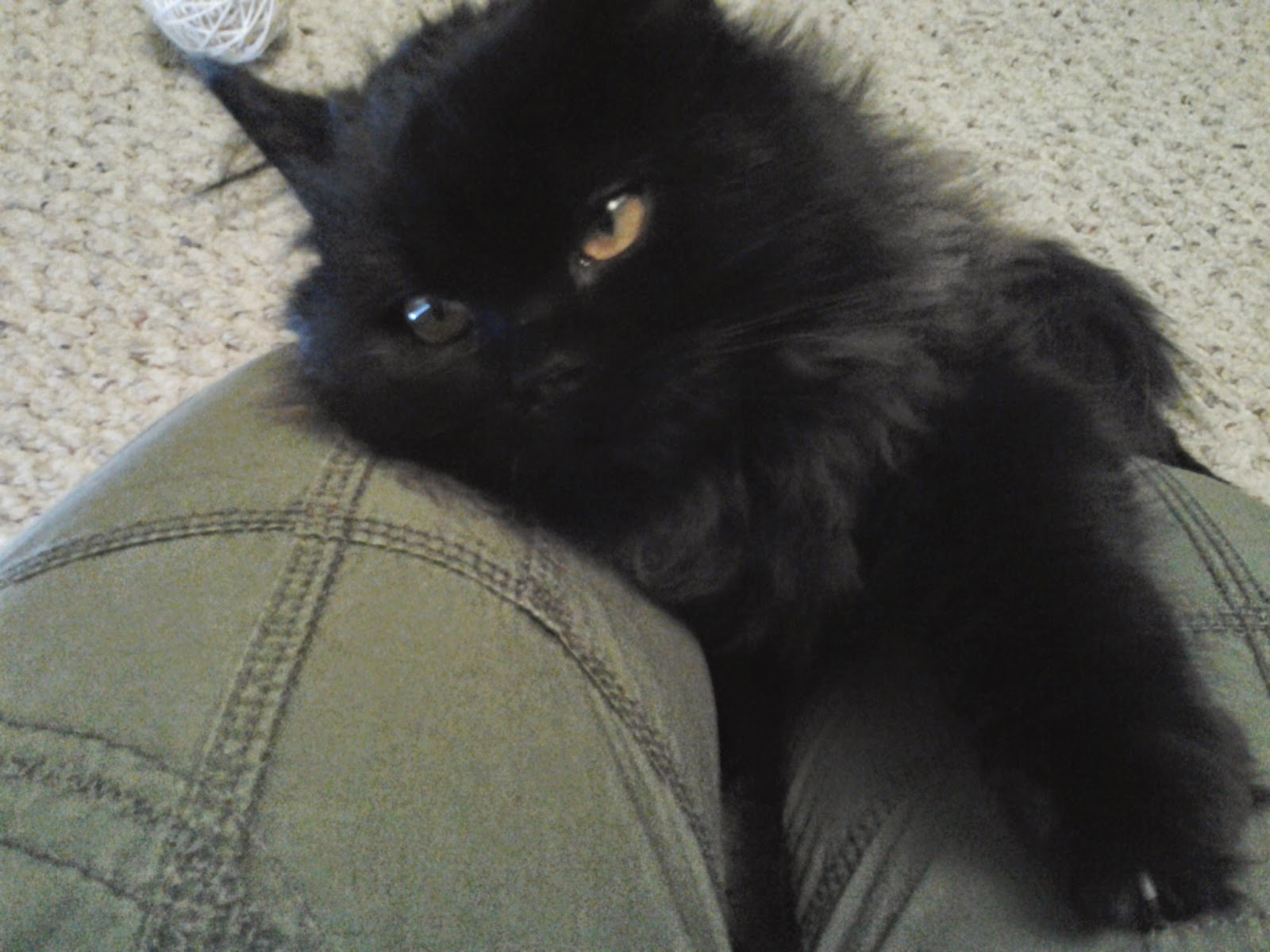 Next comes Anakin (Formerly known as PigglyWiggly, wtf kind of name is that?!). He was the softest most loving kitten ever! He just wanted to be held and pet. He showed curiosity about things, but wouldn't knock stuff over or be crazy about it, would just sniff, and move on. I loved him. I grew very attached. I would have kept him if not for the drooling.

You heard me, if you pet him for long enough to make him purr (more than 5 seconds), drool would begin to run out of his grateful mouth, and all down whatever part of your body he was leaning on. It. Was. Disgusting. But how can you NOT pet that face? LOOK AT IT! 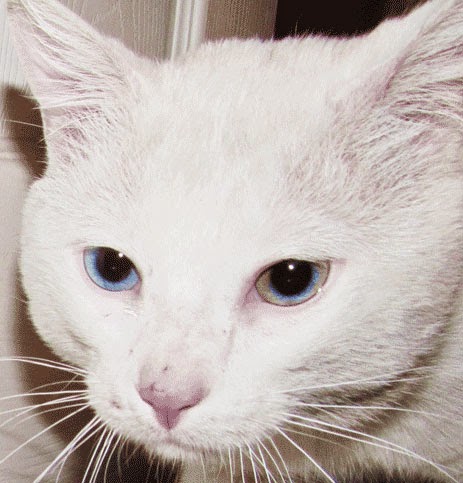 This was not a foster, he was a stray. I caught him, and catching site of a dog, he escaped my grasp. I felt terrible. I twas obvious his fur was singed off on parts from a car, and he smelled so bad of exhaust and gasoline that the scent lingered on my arms after he was gone.

I stood on my balcony, irritated, looking on the neighborhood behind me, and there he was! I grabbed my bike, running haphazardly down the stairs, hopped on, and bolted after the stray. I cornered him, and rode home with him, riding my bike one handed. I'm sure people that saw me wondering why the hell I was riding my bike with a cat.

I cleaned him with dawn, and got the oil out of his fur, and made sure the burns didn't go to his skin. "You're Singe, from your singed fur," I named him. He held to my arm, gently trying to pull away from the bath water he was submerged in, but never hurt me. He took that bath like a champ! I gave him out to be adopted, and this bi-eyed door greeter of cats took a little longer than the younger ones I'd had to be adopted, but his good-natured greetings to anyone who walked into kitty city soon won over a helpless human, and he found his home. 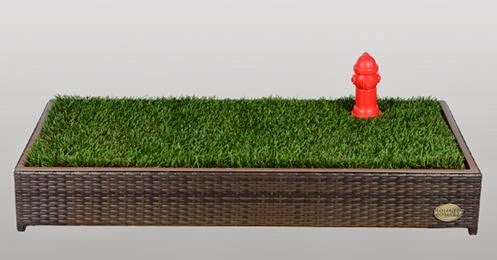 Step 2 in Porch Potty instructions is to hug your dog! How precious! Tips and Tricks says if you're dog won't pee, try mixing half a bowl of broth and water, and then they'll have to pee after drinking it all!

Well she wouldn't pee. So I gave her another bowl. MISTAKE! From 11 til 2 something AM I had to take her out to pee multiple times. But hey she used it, which was the point. Now if I can only get her to poo in the damn thing! I do wish it were a little wider, if it were 4' x 2.5' instead of 4' x 2' I think it'd be a lot easier for her to sniff around on. Other than that I think this is going to be great! I love it! Roxy on the other hand...
Posted by Jen at 10:18 AM No comments: 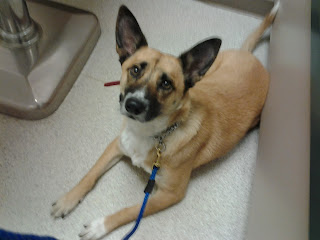 It started out well, and then the old Roxy anxious panicked whining/howling/circling began! Oh no! I was losing her fast! So I thought, WWAD! What would Ashley do! Come on B&B training, come to my brain. CYCLES! She would do cycles and heeling and so I began doing that in the tiny room I had to do it in. Eventually she became so focused on me and obeying that she forgot where we were. She forgot this was scary and new, and when she was really calm, I had her sit on the bench.

The vet assistant walked in, and Roxy didn't even move. She whined a little, just curious at who this new person was, but stayed without any word or signal from me!

She was SO GOOD the whole time! The only time she tried to pull away was when they shoved a thermometer up her butt, but who wouldn't I mean really? The vet even said how good of a dog I have, and how it's so nice to deal with the sweet ones when there's so many that give the vet a hard time! I mentioned it was a lot of training and he should've seen her a month ago LOL! Roxy had a great experience, even though she was poked/prodded/stabbed/violated, she felt confident and calm and trusted me! And I was a happy mommy =).